The past few days I have spent reading away both Divergent (finally) and Insurgent (which is released in the UK today!) so that I could bring these reviews to you on time (although I should be revising but I'm part of a team and I will not let them down! GO TEAM ERUDITE UK!)

So to kick things off here is my review for the first book which I'm sure many of you have read already! 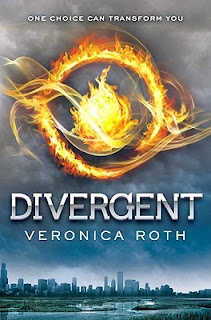 I have a passion for dystopian books, I think the reason is that in some ways they hold onto the future of reality and that is why it is not just the story of the Divergent novels which I adore but the ideas behind them. The five factions, they each stand for an important human characteristic; yet they have been separated when to function as a whole community they need each other and I think there is a such strong message in this.
When I started reading Divergent I didn't expect anything like it, in fact someone had mentioned to me it was about war and I knew it was dystopian so I wasn't really sure what to expect. I found some of the dystopian ways in which their community was shaped similar to other dystopians I have read yet it is so original. The way that their world has been structured into something completely different and out of the ordinary is just extraordinary. Another reason I love dystopians is because I read to escape and after reading dystopians where their world is so tragic when you return to reality you feel like it doesn't compare.
I loved how fast paced and adrenaline inducing the book gets at times, I'd be on the edge of my seat, and the range of emotions this story can make you feel is quite incredible. I found that courage is something shown a lot in Divergent mostly through Tris, the main character, but I also found it deals with trust and strength and stability, love, grief, anger and so much more and that as a reader you can experience these with the character.
The story that goes into their training is one of my favourites as it becomes sort of like education/school in a way which as a college student blogger.. I can relate to very much and when Tris develops true friendships for the first time and momentarily those are taken away from her, I was able to relate a lot to her then too, which made the story much more intense for me as a reader, although despite that the book is full of tension!
I adore both the characters Tris and Four (Tobias) in this book, they are such goal orientated, morally right people it is admiring. From the moment Four enters the book I knew he would become important to Tris and to the story, there was just something about him.
I don't know how Veronica Roth did it, but she found a way to display all of humanities flaws in a novel and this is everything I believe in but don't know how to explain and that's why this book is just incredible and I think that if you haven't read it yet, you should because it's not just a story, it's something that needs to be heard.
Rating: 5/5 what can I say, I love dystopian novels! 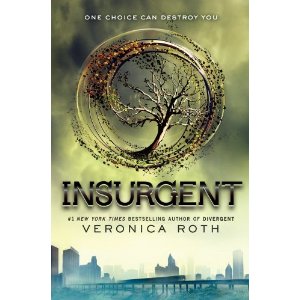 From the very first page there was something original about this book. It starts pretty much where Divergent finished and I for one have never read a series which doesn’t have time between books giving a chance for loose ends to be tied, instead you are put straight back into the action. That is why from the very first page I adored Insurgent.

It is very much like Divergent in ways, except the action is faster paced hitting at every chapter, something new, something you did not expect… it is even more unpredictable than Divergent.
It is more emotional than the first instalment as there is more action, more attachment to the characters, however the story doesn’t linger in those moments, you find you can’t dwell on that sadness for long enough because the story has moved on and you want to move on with it.
There is so much that happens in this book, so much that happens within a small chapter of it, that I find it hard to explain… you'll be shocked more times than you'll find something happens that you expected and that is what I adore.
So I’m going to break it down starting with the characters:
Tris – I adore her, her strengths and weaknesses, her will and love and care, selflessness, ability and intelligence… she is fragile in many ways yet the strongest character; the hardest fighter.
Tobias – I adored him in Divergent however in Insurgent I found him a little suspicious and began to doubt him; yet he proves himself to be that gentle, strong and loving person he is in Divergent.
Jeanine – Until the very last pages of this book I despise her, she seems selfish and unsympathetic because her reasons are not displayed for a long time.
There are a lot of feelings towards certain characters in this book, but I will leave the rest for you to figure out on your own.
Possible morals within this story:
How to deal with grief and guilt – through Tris’s experiences throughout the book.
How to really view a person and the world – through the factions and the member’s attitudes.
And most importantly - That no matter what you need to keep fighting.
Rating? just mind blowing, highest rating I can possibly give 5/5.
I could barely tare myself away from Insurgent, I’m one of those people who has to finish the end of the chapter before I put a book down, so I would say to myself I’ll just finish this chapter and then I’ll text that person back or I’ll go have a shower but I’d find several chapters later I still had not done those things. I found myself sitting tensely rather than relaxed while reading, eager to read on. I discovered I my reading pace tripled during reading Insurgent because of how absorbed in the story I was, I felt like I was in that book and the adrenaline that continued to pulse through Tris’s veins, pulsed through mine.
When you are reading a book and you feel the little amount of pages that are left could not possibly hold the ending the way you want it to go or any way you can think of at all, because there are barely any pages left and you still feel like you’re in the middle of the book, you want to hurry and read on so that you finally know how it ends but you also feel scared of the ending; suspicious, cautious to read on, that is the kind of ending I love and to me Insurgent ends that way.
And then I read the ending and I had never been more shocked, in a way it was exactly what I wanted yet it was not at all expected. Such a perfect ending, I am actually speechless.

They are rather short reviews, but I don't really know what to say I read them straight after one another and I guess I'm just totally mind blown- also I haven't reviewed in so long I feel like I've forgotten how.
But thank you for reading and I hope those of you who have read Divergent go out and buy Insurgent because it is a must read; and those who have not read either, well you know what to do!

Reviewing Insurgent for Harper Collins UK for its release in the UK today as a part of TEAM ERUDITE UK group!
Posted by Unknown at 22:35