Last May, a month or so after I began marketing my novel, In Leah’s Wake, a former agent told me that I would never sell 500 books. A rookie, I had no idea what to expect. When I published the novel, I’d dreamed of selling a 3,000 – 5,000 books, hoping healthy sales numbers would attract the attention of an agent or traditional publishing house for my next novel.

The agent had left New York, but she’d been in the business for a long time, and her words stung. I hung up the phone, heartbroken, depressed. Had I not been in the midst of my first blog tour, I might have pulled my novel off the market that day.

Determined to see the tour through, I soldiered on.  On the tour, I met wonderful, caring people, book bloggers, whose kindness buoyed and sustained me.

Over the next few months, In Leah’s Wake appeared on hundreds of blogs. Bloggers opened their hearts and spread the word about this quiet literary novel. In August, In Leah’s Wake hit the Barnes & Noble and Amazon charts. Now, seven months after my talk with that agent, the book has been in the Amazon top 200 for over five months, and we’ve sold just shy of 80,000 copies.

Book bloggers rock! I don’t know how to say it any better. Book bloggers are the fairy godmothers and godfathers of the literary world. They invest their talent, their energy, and their time into reviewing and promoting books – and keeping dreams alive.

Even today, traditional media refuse to recognize or review indie books. In this very real sense, book bloggers are the heart and soul of the indie revolution.  Their vision, their energy, and their determination have enabled this amazing populist movement to take hold.

Today, we have the great good fortune of hearing the funny, poignant, intelligent voices of new authors from around the world - voices that, just a few years ago, might have been silenced by the gatekeepers of the old guard. These voices reach into hearts and minds, forging connections, uniting us in a community of readers and writers, searching for and finding, through words, the better part of ourselves. Because, truly, at heart, this is what reading and writing is all about.

Here’s to you, book bloggers! You are and always will be my heroes!

AUTHOR BIO
Terri Giuliano Long is the bestselling author of the award-winning novel In Leah’s Wake. Her life outside of books is devoted to her family. In her free time, she enjoys walking, traveling, and listening to music. True to her Italian-American heritage, she’s an enthusiastic cook. In an alternate reality, she might be an international food writer. She lives with her family on the East Coast and teaches at Boston College. In Leah’s Wake is her debut novel.

This week, Terri and Inspired Quill Press (paperback edition), launch a newly edited edition of In Leah’s Wake. The newly edited novel features a new chapter and several new scenes, adding new connections and insights, and tightens the book, cutting 60 pages – all while maintaining the integrity of the original edition.

For more information, please visit her website: www.tglong.com/blog or any of these retailer sales. (Your local library or bookstore can also order the book through major distribution channels.)

The Tylers have a perfect life—beautiful home, established careers, two sweet and talented daughters. Their eldest daughter, Leah, an exceptional soccer player, is on track for a prestigious scholarship. Their youngest, Justine—more responsible than seems possible for her 12 years—just wants her sister’s approval. With Leah nearing the end of high school and Justine a seemingly “together” kid, the parents are set to enjoy a peaceful life…until everything goes wrong. Can this family survive in Leah’s wake?

Praise for In Leah’s Wake

“Pulled me right along as I continued to make comparisons to my own life.”
Jennifer Donovan, 5 Minutes for Books, Top 50 Book Blog

“An incredibly strong debut, this book is fantastic on many fronts.”
Naomi Blackburn, Founder Sisterhood of the Traveling Book 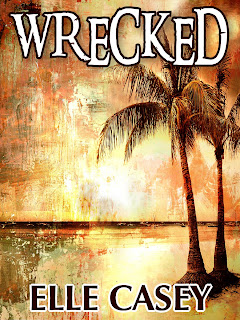 Title: Wrecked
Author: Elle Casey
Description:
If you liked The Breakfast Club and The Swiss Family Robinson, you'll love WRECKED! An ill-fated Caribbean cruise and four teenagers: a nerd, a jock, a mouse, and a beauty queen…an island, a treehouse, some nefarious interlopers…life and death…fear and loathing…love and laughter. Follow Jonathan, Kevin, Candi and Sarah as they find their typical high school lives and their worlds totally WRECKED.


I will be reviewing this book soon, so keep your eye out!


What inspired me to write Wrecked?


To answer this question, I have to give you a bit of history ...

So – about me – I’ve been an avid reader since I was really young.  The first books I remember loving were Snow White and the Seven Dwarves and Pinocchio.  My Uncle Jeff gave me these big, colorful Disney books for my fourth birthday and my mom would read them to me every night before bed.  The colorful pictures really brought the stories to life.  Later of course I didn’t need the pictures – preferring instead to create my own scenes in my head.  The fantasy present in those books inspired me to read more.

From the time I was around seven or so, my grandfather worked at a publishing house in the printing department, and he’d get boxes of books that weren’t going to be sold, destined for the garbage dump.  I’m not sure if they were bad prints or what, but it meant a lot of free books for me.  I read everything from A Connecticut Yankee in King Arthur’s Court to Treasure Island.  All of these longer books were abridged versions for kids.  Because I read so much in the next few years, I became a very fast reader.  I practically swallowed books whole.  I could read at least one a day after school.  I spent a lot of time in a comfy chair or sitting up in bed reading, especially on weekends.  I got regularly busted with a flashlight under the covers when I was supposed to be sleeping.  I was tired at school a lot.  I preferred my fiction to school textbooks.  I moved up from abridged versions to full versions of a lot of American classics, both older and modern.

I found myself drawn to books that featured kids who were somehow thrust into adult situations without adults around to help or guide or even provide for them.  Three books that really stick out in my mind are Children In Hiding, The Girl Who Owned a City, and Baby Island.  I’ve re-read them as an adult and I still enjoy them, although I realize I missed some of the underlying messages that were there.  That wasn’t important to me as a kid and actually I’m kind of glad I ignored the bigger issues and latched onto the ‘independent kid’ theme.  I think it helped shape my personality to be one of a very self-sufficient, ‘never say never’ type of person.

So now you know the type of stories I was attracted to as a kid.  Fast forward to an ugly divorce between my parents and the corresponding difficult, angry teen years – and you’ll see that I had even more reason to bury my nose in a book.  I found solace there.  I was struggling to identify myself, figure out who I was.  I didn’t fit into the molds my parents had planned for me.  In books I met characters who weren’t fitting into molds either, but they were having adventures and discovering that they were okay, even if they were different.  Again, I loved it when young characters took charge and did what needed to be done, damn the consequences (or adults getting in the way!)  What can I say?  I was a rebel at heart.

My first novel is Wrecked which I’ve likened to a cross between The Breakfast Club and The Swiss Family Robinson.  When you read it, you will see that I was inspired by stories like Baby Island, Treasure Island, and the film Castaway.  You can see my history throughout this book too.  There are kids who don’t fit in, but want to.  You see kids who have to survive without adults.  You see kids getting a new perspective on life, showing them that maybe there’s more than one way to be – that fitting into a mold may not be the best choice.

I actually had to write this book.  It has been in my head, floating around, nagging me, basically haunting me for many years.  But writing it was like therapy in a way.  I created a world and a group of people who needed to have their stories told.  It’s like I just took dictation of what really happened to these kids – Sarah, Kevin, Jonathan and Candi.  These characters are real for me, and my sincerest hope is that someone out there will read Wrecked and identify with them and care about them too ... and maybe even find inspiration in their adventures.

So, in a nutshell, I wrote Wrecked because it was the only way to get any sleep at night (and of course, its underlying themes were so important to me as a kid).  Now my innermost hopes, worries, and realizations are out there on paper and I can not only sleep at night but also move on to other exciting projects.  Speaking of which... my next love, after the idea of kids surviving alone, is the world of Young Adult Fantasy.  So now my nights are filled with the War of the Fae, my new series.  The characters are independent kids, extraordinary kids – they don’t fit in but there’s a very good reason for that.  I’m super excited about it.  You can read a quick summary of the story on my website www.ElleCasey.com.

Thanks to Mazz at Words on the Shelf for having me as a guest blogger.  Happy reading everyone!