Review: The Girl Who Owned a City by O.T.Nelson 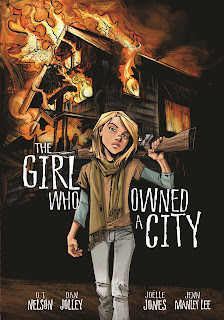 Name of Author: O.T.Nelson
Publisher Name: Lerner Publishing Group
Publication Date: April 01, 2012
Imprint: Graphic Universe
Review copy: Net Galley
Book blurb:
A deadly virus killed every adult on Earth, leaving only the kids behind. With her parents gone, Lisa is responsible for her little brother, Todd. She has to make sure they stay alive. Many kids are sick or starving, and fierce gangs are stealing and destroying everything they find. Lots of people have given up, but on Grand Avenue, some kids are surviving. Because of Lisa.
Lisa figured out how to give the kids on Grand Avenue food, homes, and protection against the gangs. But Tom Logan and his army are determined to take that away and rule the streets themselves. How long can Lisa's group keep fighting them off? They need to find a place to live safely. A strong place. A secret place.
In a world like this, someone has to take charge. But does Lisa have the strength to take charge of a whole city?
This title is scheduled to be archived on February 1, 2012
I was pleasantly surprised by this novel, when I first requested it I thought that sounds like a great dystopian novel, not realising it was actually a graphic novel at the time, however I wasn't disappointed. I'm not entirely sure what age group this book is aimed at but I think it's younger than me and for a seventeen year old girl I still have to admit this book had me hooked. Yes you could say I'm artistic and therefore found all the graphic pictures interesting- which they were, amazing, but I'm honest when I say I actually sat down and was glued to my laptop.
I love the whole concept of this book, to teach children to think for themselves and to stand by one another in times of need and not fight for no reason. I think it's not something that only needs to be learnt by children, maybe this novel should be read by everyone worldwide and learn these lessons too.
The story line was thrilling, I feel silly saying it, but I really enjoyed it I am still a big kid at heart I guess, or maybe it just goes to show teenagers and young adults will enjoy this book too. The beautiful illustrations just add to the tension of the story, they are beautiful and arty, which I adore and I think many others will too; however I did think a couple of the older kids looked older than twelve but they're cartoon pictures how can you tell right?
Throughout the story there are a lot of things children and other readers will be able to relate to such as bullying, the relationship and bond between siblings and they'll recognize that usually people who bully are vulnerable themselves.
The whole idea the book is based on I think could be elaborated into much more of a story, maybe not a children’s story, but the base idea that all adults have gone, if when the remaining children turn into adults will go too is just brilliant and has real potential but that's getting off the point.
The Girl Who Owned a City will teach children (or other readers) that it's ok to think for yourself, that your gender doesn't make you weak or strong in Tom's case. It's a great story/graphic novel that will make you wonder what you would do if all the older responsible people who ran the world was gone.
Words on the shelf gives 5/5 to The Girl Who Owned a City: Graphic Novel by O.T Nelson
Posted by Unknown at 15:30 No comments: