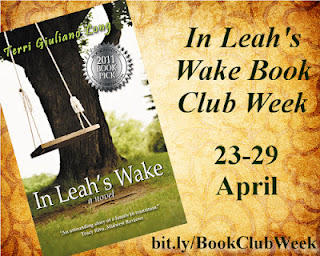 In late April (23-29) Terri is running a ‘Book Club Week’ on her blog, with a range of events to help book clubs, reading groups and readers in general get more out of her contemporary fiction title, In Leah’s Wake.
There is also a dedicated page on Terri’s blog (http://terriglong.com/blog/in-leahs-wake-book-club-week-april-23-29/) that people can visit for updates – they can also enter a competition to win an Amazon voucher worth $100 or one of five signed paperback copies.  In addition, a book club/reading group will have the opportunity to win a set of up to 20 copies of Terri’s next novel, Nowhere to Run.

So I guess you want to know how can clubs/readers get involved?
They can get involved in so many ways!  They can submit a question for Terri, share some of the topics they’ve been discussing about the book, submit a short piece (100-200 words) on their favorite character – any of these activities will give participants an entry into the competition to win an Amazon voucher worth $100.

To enter the Book Club Competition and be in with a chance of winning a set of 20 copies of Nowhere to Run for a  book club or reading group, entrants simply submit a collective summary of what their group or club thought of In Leah’s Wake.  If they haven’t read the book yet, they can also submit their views on why they’ve chosen to add the title to their schedule.

Here is the schedule for the 'Book Club Week'...

MONDAY 23R D APRIL: WELCOME TO IN LEAH’S WAKE
Terri shares a candid introduction to the book and her success so far and talks about the role of book bloggers and reviewers in boosting In Leah’s Wake up the charts

TUESDAY 24T H APRIL: THE CHARACTERS OF IN LEAH’S WAKE
Terri invites readers and bloggers to share their thoughts on their favorite characters within In Leah’s Wake and talk about the moments they loved most
In the evening enjoy a live Q&A session with two pivotal characters from the novel: Zoe and her daughter, Leah.

WEDNESDAY 25TH APRIL: THE STORY BEHIND THE STORY
An interview with Terri looks into the story behind the story: how Terri came to write In Leah’s Wake and how it came to be the “little indie book that could” selling over 100,000 copies so far!

THURSDAY 26TH APRIL: YOUR QUESTIONS ANSWERED
Answering questions by submitted book clubs, readers’ groups, readers and bloggers, Terri will share her thoughts on the novel, the writing process and what lies ahead
In the evening enjoy a Q&A session with Terri Giuliano Long and the chance to put forward your questions live

FRIDAY 27TH APRIL – SUNDAY 28TH APRIL: IN LEAH’S WAKE: IN DISCUSSION Share your views on some of the discussion topics raised in the In Leah’s Wake reading guide. We’ll be publishing your thoughts along with any new discussion topics you suggest.

SUNDAY 29TH APRIL: LOOKING AHEAD: NOWHERE TO RUN Terri shares her thoughts on her upcoming novel, Nowhere to Run, and talks about what it’s like to work on a very different kind of story.

About The Holders
17-year-old Becca has spent her whole life protecting her brother - from their father leaving and from the people who say the voices in his head are unnatural. When two strangers appear with apparent answers to Ryland’s “problem” and details about a school in Ireland where Ryland will not only fit in, but prosper, Becca is up in arms.
She reluctantly agrees to join Ryland on his journey and what they find at St. Brigid’s is a world beyond their imagination. Little by little they piece together information about their family’s heritage and the legend of the Holder race that decrees Ryland is the one they’ve been waiting for.
But they are all, especially Becca, in for a surprise that will change what they thought they knew about themselves and their kind.

About Julianna Scott
Julianna was born In Pittsburgh, Pennsylvania, and spent the majority of her educational career convinced she would be a musician.
However, after receiving her music degree from Edinboro University of Pennsylvania, she realized that she'd been born in the wrong era for her dreams of singing jazz to adoring fans clad in zoot-suits and flapper dresses to come true, and began to wonder if her true calling might be elsewhere.
While Julianna had always excelled in writing throughout school, she'd never considered it a career possibility until about three years ago, when she came up with her first story idea and decided to go for it. She grabbed her laptop, started typing away, and has never looked back.
You can visit Julianna’s website at http://juliannascottauthor.com.
Amanda said: “The Holders showcases an utterly engaging new voice in YA fiction – with supernatural powers and a gripping love story set against the stunning backdrop of Ireland. I was enthralled and know you will be too.”
Julianna said: “I am so excited to be a Strange Chemistry author! It is truly a dream come true!”

About Pantomime
R.H. Ragona's Circus of Magic is the greatest circus of Ellada. Nestled among the glowing blue Penglass – remnants of a mysterious civilisation long gone - are wonders beyond the wildest imagination. It’s a place where anything seems possible, where if you close your eyes you can believe that the magic and knowledge of the vanished Chimeras is still there. It’s a place where anyone can hide.
Iphigenia Laurus, or Gene, the daughter of a noble family, is uncomfortable in corsets and crinoline, and prefers climbing trees to debutante balls. Micah Grey, a runaway living on the streets, joins the circus as an aerialist's apprentice and soon becomes the circus’s rising star.
But Gene and Micah have balancing acts of their own to perform, and a secret in their blood that could unlock the mysteries of Ellada.

About Laura Lam
Laura was raised near San Francisco, California, by two former Haight-Ashbury hippies. Both of them encouraged her to finger-paint to her heart’s desire, colour outside of the lines, and consider the library a second home. This led to an overabundance of daydreams.
She relocated to Scotland to be with her husband, whom she met on the internet when he insulted her taste in books. She almost blocked him but is glad she didn’t. At times she misses the sunshine.
You can find Laura’s website at http://staticsplit.wordpress.com and follow her on Twitter at www.twitter.com/LR_Lam [@LR_Lam].
Laura says: “I originally subbed to Angry Robot Books’ Open Door Month a year ago, thinking I’d get a form rejection, shed a tear or two, and continue to write. It was a long year with much refreshing of my inbox, but I’ve learned so much and am grateful Amanda plucked me from the slush and gave me a chance to make Pantomime shine. I’m beyond excited to be a Strange Chemist.”
Amanda says: “I was Laura’s original reader during the Angry Robot Open Door Month and passed her MS along to the AR editors – even knowing that it was close to a first draft, because I saw the promise in this novel. After revising and improving, Pantomime is now an incredibly rich novel with the tone of Robin Hobb and the adventure of Tamora Pierce – it is a new must-read in the realms of YA fantasy!”

More information can be found at strangechemistrybooks.com and angryrobotbooks.com.
Angry Robot is a genre publisher that brings readers the best in new SF, F and WTF?! Strange Chemistry is Angry Robot’s YA imprint. All titles are released as paperbacks and in all major eBook formats. Distribution is through Random House (North America) and GBS (UK). Angry Robot is part of the Osprey Group.
For more information or to place requests for review copies, interviews and features, please contact our Marketing Manager, Darren Turpin at darren.turpin@angryrobotbooks.com or by phone on +44 (0) 7584 355911 [during UK Office Hours]

Why haven't I been around?

So I haven't posted in a while, I apologise for that. I have been crazy busy with college (I can't believe my first year is almost over, I'll be a uni before I know it!), work and you know well I am a teen. I've barely read or wrote in months.. I feel so bad for that. But I have been receiving the odd (amazing) books here and there to review... so look forward to those! Summer is fast approaching, so hopefully during summer this blog will be buzzing with life again!

Ohh and.. guess what.

I get to review INSURGENT (crazy excited) ok so I admit I started reading Divergent at the start of the year and got waylaid but.. I'll get there and you'll get the reviews on time :P after all I am part of Team Erudite UK and we is so gonna win. If you're part of another team... hi there.. good luck ;)

What's going on with me?

Well college mostly.. I passed my first AS exam in Psychology with an A (74/80) which I almost died when I heard so that was a good day.. I am learning to drive (watch out UK) just got to pass that damn theory test.. I have more exams after this easter break :( (I should be revising but hey)... I miss writing (*current thinking* do I still want to be an author?).. I'm starting to look into Universities and what courses I want to do (I know English would be a great degree to get, but I'd only do a creative writing degree, but I'm not sure if I'll miss art, wouldn't art be fun to do at Uni though?).. I know a Uni not that far from where I live to be honest does a joint of the two.. so maybe that.. got another year of college to survive first, but to be honest it's flying.

Ohh I miss the summer days I blogged everyday.

I'll be back.. soon I promise.

With loads of amazing books to review, I got a box of awesome books at christmas and haven't had the chance to read them yet.

Also might hold some giveaways to make up for my absence and all that!

Hope all is good in the blogging world and with all of you.