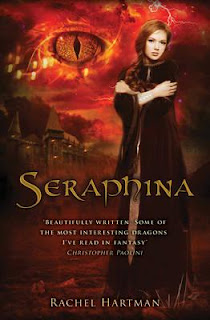 The inspiration behind the book

My inspirations for Seraphina came from all sorts of strange directions over eight long years, and are difficult to untangle from each other. Here three of the largest and most important.

One of my earliest inspirations was the famous Renaissance song “Mille Regretz” by Josquin Desprez. My sister took a course on early music at university, then came home and shared the music with us. “Mille Regretz” was one of her favourites, and I have to agree that it is something extraordinary. I don’t always warm to polyphony, but this song is achingly mournful. It inspired me to seek out more early music, and somewhere in all that listening I began to get glimmers of a musician character, but she was little more than a shadow.

I was a musician myself when I was younger, playing cello all the way through university. I particularly loved performing in an orchestra, how the music swept so grandly around and through me. It was an unbelievable rush, much more intense than being a mere listener. I had always wanted to convey that feeling, and having a musician as the main character gave me the opportunity.

A second spark of inspiration came from my parents’ divorce, as sad as that was. I was almost thirty and was shocked by how much it hurt. You’d think an independent adult, married and living far from them, would not have felt it so keenly, but I absolutely did. I had a lot of processing to do, and somewhere in all that an idea came to me: what if you married someone with a secret, and you didn’t learn the truth until they died?

I realize that’s a question that’s been asked before (The Constant Gardener comes to mind). There were  lots of possible secrets, however, and I had just the thing readily at hand. I had been writing and illustrating a comic book, Amy Unbounded, for years; it was set in a world where dragons could take human form. That could be the secret: someone married a dragon, not knowing what she was, and not learning the truth until she died in childbirth.

And thus, Seraphina was born – and a born musician. The pieces were coming together, but there was still a big one missing.

I was on the second or third iteration of the book before I had this big epiphany. My son was having some difficulties in preschool, so we had him assessed. One of the conditions he was assessed for (but turned out not to have) was called “Sensory Processing Disorder”. I read about it during the assessments and was deeply intrigued. SPD affects what the brain does with sensory input. Some brains may overreact (such as finding all clothing itchy, or noises unbearable) and some may underreact (some children bump into things on purpose, just for the stimulus; some may fall out of their chairs while working because they lose track of where their bodies are in space). All brains are different, of course, and everyone has their own quirks in this regard. Such differences only constitute a disorder when they are extreme enough to be debilitating – and they can be.

If dragons can take human form, then they will suddenly find themselves with human senses. How do they adjust to that? What must it be like to go from scales to skin, or from sharp predator’s vision to our relatively pathetic eyes? And what about emotions? Would dragons even have them, in their natural shape? Would they suddenly find themselves overwhelmed by sensory input when they take human shape?

This flurry of questions informed the final versions of the book. So many wonderful things came out of it: the nature of human/dragon conflict, insights into their history and misunderstandings, tension within individual dragons, and especially a new dimension to the deception Seraphina’s mother had perpetrated, the one that had gained her a human husband and cost her her life.

Those were the wellsprings of a few ideas, anyway. I’ll tell you, though, I get inspired just walking down the street. There is nothing I enjoy more than asking “what if?” The answers to that question are myriad, and they can take you to places you never imagined.
Posted by Unknown at 11:54